CCCV Inc was formed in 1965 by a group of Citroen owners who felt they could learn more about their cars by sharing advice and technical skills.

CCCV is a club for all Citroens from the Type A of 1919 of the past to the latest models including the newly released DS range.
The club has both a technical and a social basis, which is reflected in the calendar of events and services offered. Events include outings to car shows, technical days, social outings, attendance at swap meets, the Citroen Concours d’Elegance, and, from time to time, observation and economy runs. We usually have picnics, barbecues and camping weekends. There is also the national rally of Citroen enthusiasts each Easter at a “Cit-In” which is hosted by each of the States in turn. We take part in the French Car Festival each year along with the Citroen Classic Owners Club of Australia, the Renault Car Club of Victoria and the Peugeot Car Club of Victoria, the Simca Car Club and other smaller clubs.

We sell LHM and LDS hydraulic fluid at discounted rates to club members and operate a club shop which includes service parts and gift-ware.

A monthly newsletter is made available to all members and classified advertising space is available free of charge to members. The newsletter includes advertisements by sponsors of the club where parts and service discounts are sometimes available. Sample newsletters are viewable on-line but members can log on then download new monthly editions as soon as they are printed.

Meetings are held at 8 pm on the 3rd Thursday of each month (except January and December ) at the Vintage Driver’s Club rooms, Unit 8/41 Norcal rd Nunawading Melway 48/G11.

Club meetings include reports, guest speakers and technical discussions and we celebrate Bastille Day at our July general meeting. The AGM is held in October of each year.

In December we have a BBQ get-together at a particular location on a date to be advised.

The club library is open at most meetings. We have a collection of books, magazines, workshop manuals and brochures, a selection of which may be borrowed.

Why not come to the next meeting and see the club in action? You will be made most welcome.

[Photo: Group of Citroen fans at the 50th anniversary of the DS display at Federation Square] 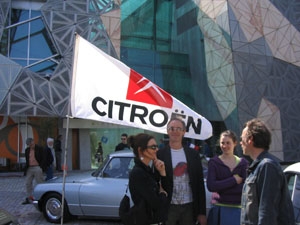