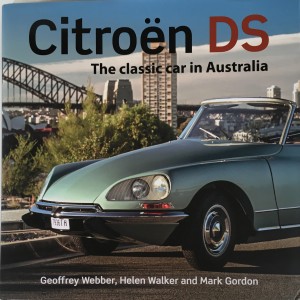 This much anticipated and comprehensive publication is now for sale.
RRP is $125. Add $25 for packing and postage anywhere in Australia.

ORDER your copy by emailing….citroenDSaustralia@gmail.com

He liked the car and wrote the book
by Peter Wilson

When Queensland architect Geoff Webber bought and assembled a
semi-restored 1974 Citroen DS23 Pallas in his retirement, he enjoyed
the car so much that he wrote a book about them.
The first samples of his mighty 376 page tome, “Citroën DS the classic
car in Australia”, have arrived from Hongkong and the full print run is
expected in mid-July. The book, with 750 photographs, is about the DS
Goddess models that were sold in Australia from 1956 and about their
owners who keep them on the road today.
The model is treasured – 60 samples of the DS were displayed at the
Brisbane celebration of the model’s 60th anniversary in July, 2015.
Geoff is a late convert to Citroën from Peugeot and has travelled
437,000 km in his Xantia and over 100,000km — many researching the
book – in his 2014 DS5, that he styles ”a great tourer”.
While living in Brisbane, Geoff was associated with the Queensland
Grand Display of French Cars and organised the venue at The
University of Queensland where he worked. He was enterprising
enough to arrange Can Can dancers for the event.
When Geoff thought of getting a classic car, he considered finding a
little 1960s Lancia Fulvia Zagato Sports, but his French car friends said
that was mad and a DS would be more practical. It was a landmark
classic design, revolutionary in its time and still striking in appearance
today, with more good examples and wider parts support available, it
was the choice of famous architects and had proved itself foiling a
presidential assassination attempt.
Geoff acquired his car in pieces from Gayndah in 2010 and over two
years put it together at his home in the Mary Valley, south of Gympie.
He sourced components from everywhere and even made up some in
his shed.
“It has amazing complexity for a car of the 50s”, he said.

As a Pallas, his car was more highly appointed and had better detail
than related models,so it took a lot of care. Geoff credits continuing to
work on the car for helping speed his recovery after heart surgery.
He has been to several car shows with the highlight being the winner in
his decade class in the Rally of Canberra Centenary Concours d’
Elegance in 2013.
Geoff couldn’t be happier” The car has given me great pleasure,” he
said.
His Goddess is “still in good shape” but still needs occasional attention,
he said. For instance, the plastic eigth-blade radiator fan recently
needed replacing and he picked up a fix from another owner for a
leaking steering rack.
Geoff was assisted with the book project by Mark Gordon, an expert in
Citroën mechanics and the models, and his daughter, Helen Walker.